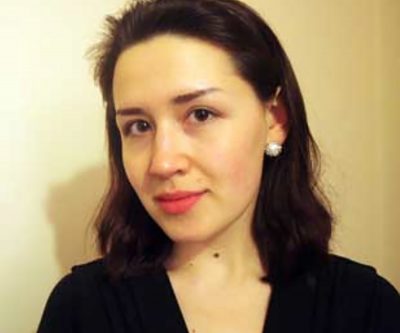 Adelia Myslov has given solo performances in Wigmore Hall, Royal Festival Hall, Fairfield Halls and 10 Downing Street, and has toured France, Spain, Italy and Germany. Her debut solo performance was at the Queen Elizabeth Hall at the age of ten, performing alongside Dame Vera Lynn. She was the winner of first prize and audience vote in North London’s International Solo Bach Competition (2009), first prize in string section of Tunbridge Wells International Competition, and the prize for ‘Best interpretation of a Hungarian piece; in the Carl Flesch competition in Hungary. She is the recipient of numerous awards and scholarships including the Monoug Parikian award at the age of fourteen, Philarmonia MMSF awards and the Countess of Munster scholarship twice in 2011 and 2012. Adelia has played concertos by Elgar, Brahms, Prokofiev, Korngold, Mendelssohn, Bruch and Vivaldi with orchestras across England. She received guidance from Sir Yehudi Menuhin while studying at his school, and participated in masterclasses with Ida Haendal, Edward Grach and Pinchas Zuckerman. She was sponsored throughout her school and college years by the London J & A Beares firm who lent her fine violins on which to play. In 2013 Adelia was made one of the six Selected Artists in Making Music’s 2013-2014 scheme, and put on the Countess of Munster recital scheme.

Adelia was born in 1989 in St Petersburg, Russia, soon moving to England with her family, where she attended the Yehudi Menuhin School and Purcell School of Music, studying violin with Natasha Boyarsky and Felix Andrievsky. She completed her Bachelor of Music at the Royal College of Music, and graduated with a Distinction in Masters of Performance from the RCM with Itzhak Rashkovsky (violin) and Adrian Butterfield (baroque violin). During her studies she received an Orpheus scholarship and was awarded an RCM Marjorie and Dorothy Whyte Memorial Fund upon graduating.

Past engagements were acclaimed recital series ‘Mortal Man; Immortal Dreams’ with pianist Craig White; together they have also given recitals at The Menuhin Hall and St-Martin-in-the-Fields. For their ‘Dances’-themed programme, which they performed in venues around the UK, they were voted Artists of the Decade by Bude Music Society. She also recently collaborated with novelist Virginia Burgess for the soundtrack to the newly published novel ‘The Virtuoso’, composed by Tim Johnson; soon to be available on iTunes. Adelia regularly plays with period ensembles, and has performed the Bach Triple concerto as 2nd solo with Adrian Butterfield. As an orchestral violinist, she led the Les Voix Nouvelles Orchestra in a London performance of Stravinsky’s Rite of Spring (St John’s Smith Square), and performed with London’s Orpheus Sinfonia at Cadogan Hall and Windsor Castle.

I would like to thank the Harrison-Frank Family Foundation for their loan of the Valenzano violin. They have made it possible for me to continue to grow as a musician. it is a beautiful instrument and has helped me greatly in my everyday work.