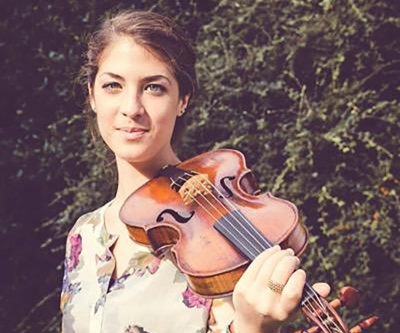 Alice Earll is a young and engaging British violinist specialising in period instrument performance. Alice studied under Pavlo Beznosiuk at the Royal Academy of Music, graduating in 2016 with a first-class degree and the Bickerdike Allen Prize for achievement.

She has since gone on to perform with the Academy of Ancient Music at the BBC Proms and as part of the Lincoln Centre’s Mostly Mozart Festival. She has also played at Shakespeare’s Globe as part of ‘Vivaldi’s The Four Season. A Reimagining’ with music by Max Richter and performed with various other groups such as the Orchestra of the Age of Enlightenment, Ex Cathedra and as a member of the European Union Baroque Orchestra (EUBO).

As a soloist, Alice has performed Telemann’s Concerto for Three Violins in F Major alongside Rachel Podger at the Wigmore Hall and has been selected for the Handel House Talent Scheme 2018/19. She has also toured the UK with a series of lecture recitals, combining her love of the solo violin repertory with her love of communication and engaging audiences in lively discussions about the wider social and historical context of these works.

As a founding member of Ensemble Molière, Alice has performed at the Brighton Early Music Festival, Bruges Early Music Festival and made her BBC Radio debut on BBC radio 3’s In Tune. Their debut CD Dance Sweets was released in 2018 and is available to buy online.

She plays on a Thomas Kennedy violin on loan from the Harrison Frank Foundation.

Upcoming performances include; Dancing with Bach, a solo recital for Hay Music, performances with The Sixteen in Spain, the Academy of Ancient Music at the Barbican and her debut appearances with the Irish Baroque Orchestra.

Without the Thomas Kennedy violin from the HFF I wouldn’t have had access to such a beautiful, high quality and historically appropriate instrument. It has been a joy to play such a responsive violin and has given me the confidence to take on auditions, tours and solo projects that I simply wouldn’t have imagined I could do before. Working with an instrument that has such a generous tone, yet still has the capacity to blend within a section has meant that it suits all facets of my job as a freelance musician, enabling me to take the first steps on what promises to be a varied and rewarding career in music.