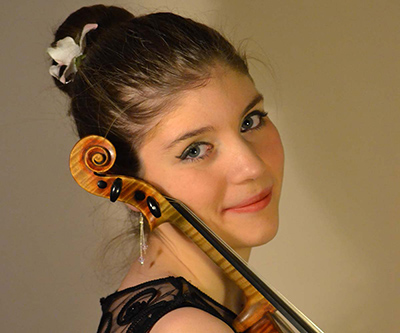 Ana-Elisabeta Popescu-Deutsch was born in Satu Mare Romania and felt drawn to music almost at the very start. Aged 6, she began to study the violin with Professor Olivia Papa in Bucharest and in 2002 she became a pupil of the “George Enescu” Music School.

A major step in her musical development was being selected in the European Union Youth Orchestra (EUYO), with which she toured Europe and the U.S.A., playing under the baton of Vladimir Ashkenazy and alongside soloists such as Itzhak Perlman, Pinchas Zukerman and Yefim Bronfman.

After being inspired by the orchestra’s high-level of playing and cosmopolite atmosphere, Ana went on to audition for the Royal Academy of Music in London, where she got a place both for her bachelor and masters degree. At the Academy, Ana furthered her musical development with Professors Richard Deakin and Mateja Marinkovic.

During her time in London, she pursued her passion for chamber music, playing in more than 7 structurally different groups. In 2016 she joined her piano quintet for a tour in Italy, playing works by Haydn and Dvorak. Later on in the year, the piano trio she was part of gave a concert in St Martin in the Fields focusing on Romanian composers’ works, one of which was heard in premiere, and Piazzolla’s The Seasons.

2017 saw the completion of a new recital project “Enescu and Friends”, that was aimed to give some new insights on Enescu and his music, as well as on the musical tendencies of the époque. The first event of the series took the shape of a violin and piano recital in Aylesbury and had works by Enescu, Vasile Filip, Dinu Lipatti and Ravel in the program.

In October, she decided to pursue her love of orchestra and chamber music, auditioning for a place in the Southbank Sinfonia. She is now a 2018 fellow, and regularly gives concerts in St. John’s Church, Waterloo together with her colleagues. As part of the Sinfonia, she had collaborations with the Cardinal Vaugham Memorial School, inaugurated the newly renovated Queen Elizabeth Hall and she is now looking forward to leading the orchestra in a family concert in the same venue on the 12th of May at 11:30am.

Ana is currently playing on a French Fiorini violin, very kindly lent to her by the Harrison-Frank Family Foundation.