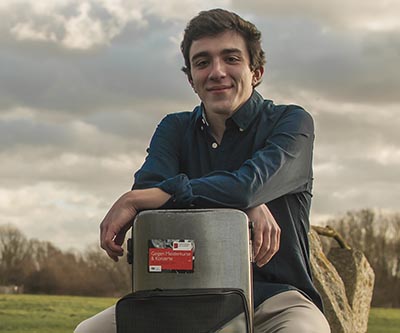 A soloist with regular recital and concerto appearances, a keen chamber musicians and orchestral player, André Gaio Pereira is a Portuguese violinist residing in London.

André was nominated Young Musician of the Year in Portugal in 2017 and consequently performed Shostakovich Violin Concerto in A minor with Gulbenkian Orchestra live for national television and radio. He has also appeared with Lisbon Metropolitan Orchestra, Algarve Orchestra, Beiras Philarmonia, Ponta Delgada Sinfonietta and Cascais & Oeiras Chamber Orchestra, and collaborated with conductors such as Christoph Poppen, Jean-Sebastien Béreau and Nikolay Lalov.

The highest graduate at the Royal Academy of Music 2015/16, André obtained 1st in Young Artists Competition in Portugal in 2017 and 2nd prize and Bach Prize at Vasco Barbosa Competition in 2016. He has attended masterclasses with Igor Oistrakh, Maxim Vengerov, Zakhar Bron, Anna Chumachenko and Gyorgy Pauk, and took part in the prestigious Kronberg Masterclasses (2011) and the IMS Prussia Cove (2016).

As a chamber musician André has appeared at the Wigmore Hall and the Cadogan Hall as the 1st violinist of the Tagus Quartet and in collaborations with the Nash Ensemble and the Doric Quartet. He was also invited for festivals such as Harmos, Mendelssohn on Mull, Oxford Lieder Festival, Marvão International Music Festival and Festa da Música,

Currently André is pursuing a freelance career after having finished his masters degree with distinction at the Royal Academy of Music under the guidance of Levon Chilingirian in 2018. This season he will make his debut with the Portuguese Symphony Orchestra and Northern Orchestra as well as his recital debut at Casa da Música. André explores other mediums too and is working with composer Eurico Carrapatoso on a cross-art production that will involve new music and recitation of Fernando Pessoa’s “Message”, which he has memorised. He is also arranging Portuguese guitar music for the solo violin, a work that will see its premiere at Setúbal Music Festival in May 2019.