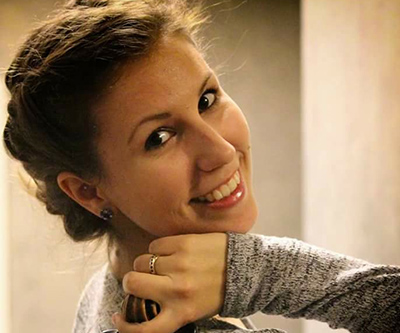 Hungarian violinist Boglárka György (born in 3rd of May, 1993 in Salgótarján, Hungary), started playing the violin at the age of 8. She has performed extensively as a soloist and chamber musician at major international festivals and masterclasses throughout Europe and Asia including the Budapest Spring Festival, Keshet Eilon, Sommerakademie PragWienBudapest, Lichfield Festival, the 11th International Music Festival in Moscow, to name a few. She is also a prize-winner of several violin competitions including the National Dénes Kovács Violin Competiton (2nd prize), the Ede Zathureczky National Violin Competition (3rd prize), the National Wieniawski Violon Competition (2nd prize) and the International Music Arts Festival in Balassagyarmat (1st and Grand prize).

Boglarka performed Bartók 2nd violin concerto with Savaria Symphony Orchestra at the Grand hall of the Liszt Academy under Gergely Madaras. Boglarka regularly performs world premieres of the works of living composers. She was invited to take part in a new project called Metronóm as a guest artist, to perform a delightful program of modern music, featuring works by Gyorgy Kurtag and Lajos Sari. She has taken masterclasses with Ani Schnarch, Michael Frischenschlager, Ulf Schneider, Giovanni Guzzo, Zachar Bron, Jan Repko. Boglarka was invited to give a masterclass at the Adam György CastleAcademy during summer, 2017. Boglarka graduated from the Liszt Academy of Music in Budapest with highest honours. She studied with full scholarship at the Buchmann-Mehta School of Music in Israel. Currently Boglarka is a student at the Royal Birmingham Conservatoire. She is a Weingarten Scholarship-holder provided by the Joseph Weingarten Memorial Trust.

She is performing on a violin by H. C. Silvestre from 1898, Paris, loaned to her by the Harrison-Frank Family Foundation.