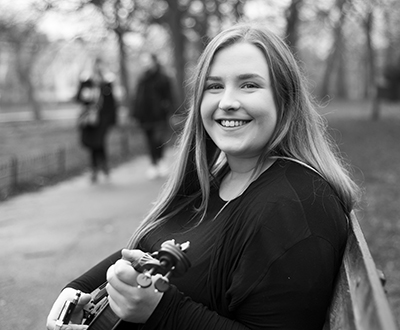 Caroline Heard graduated from the Royal Academy of Music with a Masters of Arts degree, also receiving a DipRam award (for an outstanding final recital), under tutelage of Levon Chilingirian, having previously studied with Philippe Honoré and William Leary.

Caroline is currently on trial with the BBC National Orchestra of Wales, and has performed with the Bournemouth Symphony Orchestra, Fantasia Orchestra, and the King’s Chamber Orchestra. In December 2020, Caroline made her West End debut performing in the London Musical Theatre Orchestra’s production of ‘A Christmas Carol’ starring Brian Conley, and in July 2021 took part in a ‘West End Showcase’ at the Royal Albert Hall. She has worked with conductors such as Semyon Bychkov, Marin Alsop, Sir Mark Elder and John Wilson.

Caroline is a member of the Salwa Quartet, who were awarded a place in the Royal Academy of Music’s A.S.S.E.T. Scheme for string quartets in 2020/21, receiving coaching from Martin Outram. In the summer of 2021, they performed at the North York Moors Chamber Festival as part of the Young Artists programme, playing music by Hensel, Caroline Shaw, Britten and Bridge, and have more recitals planned for the summer of 2022.

In the summer of 2020, Caroline was a scholarship student on the ‘Friend’s International Violin Academy’, where she studied with violinists such as So Ock Kim, Rodney Friend, Siyeon Ryu and Dong-Suk Kang. She was invited to perform as a solo and chamber musician of the ‘Encuentro de Música y Academia de Santander’ in July 2020, but it was sadly cancelled due to Covid-19.

Caroline was a recipient of the Help Musician’s named Parikian Award, a Countess of Munster Trust Award, and was a Royal Academy of Music Scholarship student. She plays on a violin by Carlo Bisiach (1948) on loan from the Harrison-Frank Family Foundation.