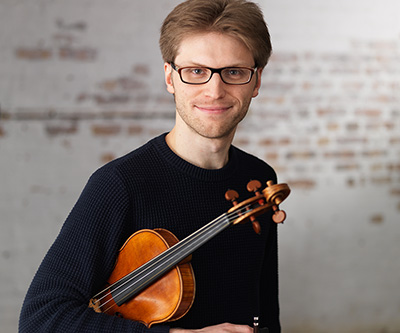 Originally from London, Ontario, Christopher Jones read music at McGill University in the class of Jonathan Crow, graduating with a BMus (Hons) first class in 2009. He was then offered a scholarship to complete his masters studies at the Royal Northern College of Music with Pavel Fischer and Leland Chen, graduating in 2011 with distinction.

In addition to leading the Gildas Quartet, Christopher frequently directs the London Musical Arts Orchestra at St. Martin-in-the-Fields from the violin, with whom he has appeared as a soloist for various concertos and other works by Bach, Beethoven and Vivaldi. Other concerto appearances include performances of the Sibelius Concerto with the New Bristol Sinfonia, and of the Butterfly Lovers, Stravinsky, and Paganini Concertos with the Sheffield Philharmonic Orchestra. Christopher also enjoys working as an orchestral musician, playing with the Manchester Camerata, the Hallé, the Orchestra Symphonique de Montréal, Sinfonia Cymru, and guest leading the Skipton Camerata. Elsewhere, he has led a performance of Goehr’s …Around Stravinsky at the Wigmore Hall which was later featured on BBC Radio 3.

As my primary instrument over the last few years, it has made an enormous difference to both my career and that of my quartet. I’ve ha the pleasure of playing it at the Wigmore Hall, the Barbican, many times as a soloist at St Martin-in-the-Fields, and at other major venues throughout the UK and the continent. Please can you pass on a huge THANK YOU to the Harrison Frank family for the time I’ve had with this wonderful instrument. I do hope its next player cherishes it as I have.