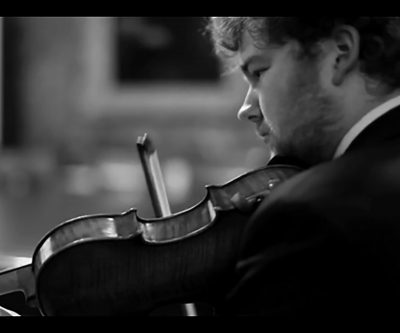 Colin Scobie was born in Edinburgh in 1991 and began playing the violin at the age of eight, taking lessons with Rosemary Ellison (at St Mary’s Music School, Edinburgh). He was also taught by Fiona Winning and Catherine Marwood, before going on to the Royal College of Music in London, studying there with Dona Lee Croft and Lucy Russell. His concerto debut was held in Edinburgh’s Queen’s Hall in 2008, which was recorded by Radio Scotland and has since been relayed many times. Other broadcasts include a Piazzola duet with trumpeter John Wallace and he has given a number of concerto performances in Europe with orchestras including Musica Alta Ripa, the Orchestra of the Age of Enlightenment and the Covent Garden Chamber Orchestra.

Colin’s chamber music career started in 2010 when he was appointed 2nd violin of the Fitzwilliam quartet with whom he performed extensively for 2 years, touring Europe, Africa and America. He has also since collaborated with such eminent musicians as Marcia Crayford, Stephen Orton, Martino Tirimo, Moray Welsh, Colin Carr, and Alexander Hohenthal. He has recently been appointed 1st violin of the Maxwell Quartet, a group who specialize in contemporary music and give performances all around Scotland.

Historical performance is an area in which Colin is becoming increasingly interested and he has cultivated this by taking part in many projects using period instruments. Whilst at college, he directed and played concertos with the RCM Baroque Orchestra and took part in the OAE’s Experience Scheme. He has since performed as leader or soloist with many of London’s period performance groups.