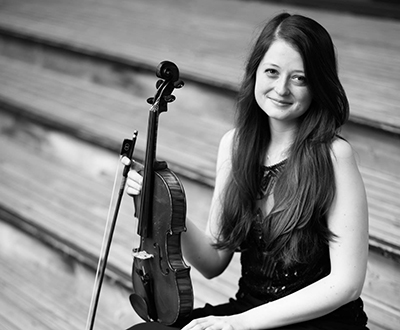 After receiving a Distinction in her Masters in Orchestral Performance in 2020, and a First Class BMus(hons) Violin Performance degree from the Royal Welsh College of Music and Drama, Dayna is now freelancing as a professional orchestral musician. She has worked with orchestras including the Welsh National Opera, English Symphony Orchestra and Sinfonia Cymru and looks forward to working further with both the Welsh National Opera and English Symphony Orchestra in 2022.

During the Covid-19 Pandemic, Dayna also ventured into solo violin recording work and can now be found on Spotify on albums including Hwaino’s “We Lost Another Moon” and “The Insomniac Sessions” and also recently worked on the upcoming debut album for band SkyQuaker featuring alongside musicians including Mike Garson (David Bowie, Sting), Roo Savill (Sting, Florence and the Machine), George McFarlane (Prince, Sting) and Paul Jordanous (Rag n Bone Man).

Dayna plays on a violin by Richard Duke (1778) on loan from the Harrison-Frank Family Foundation.