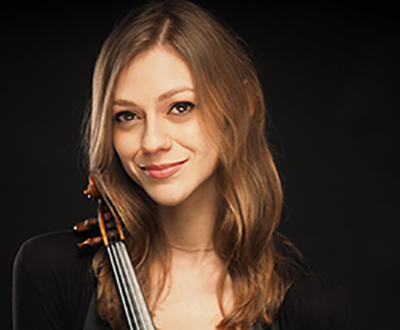 Emily Nebel enjoys a varied career as orchestral leader, recitalist and chamber musician. Over the last few years she has gained recognition as a leader across the UK and Europe, appearing with the London Symphony Orchestra, City of Birmingham Symphony Orchestra, Royal Scottish National Orchestra, Staatstheater Darmstadt, La Monnaie and Norrköpings Symfoniorkester, among others.

She has appeared as soloist with such orchestras as the Cleveland Orchestra and Phoenix Symphony and in 2019 performed Walton’s Violin Concerto with John Wilson and the Academy Symphony Orchestra. An avid chamber musician, Emily has been invited to numerous chamber music seminars, most notably IMS Prussia Cove and Open Chamber Music, Krzyzowa Music Festival, Domaine Forget, and Birdfoot Festival in New Orleans. Her debut album of French sonatas with pianist Jean-Sélim Abdelmoula was released in April of 2020 on Linn Records.

Following studies in the States and Germany, Emily settled in London after graduating from the Advanced Diploma programme on the Bicentenary Scholarship Scheme at the Royal Academy of Music.

Emily plays a Gatto/Cappa violin, Turin (c1660), on loan from the Harrison-Frank Family Foundation, and a bow by Eugène Sartory on loan from a private lender.