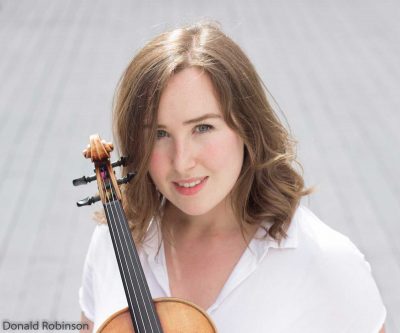 Passionate about bringing live performance to everyone, Emma Purslow is a violinist and violist working as a soloist, chamber musician, teacher and orchestral player in the UK and abroad. She is currently based in London following the recent completion of her studies at the Royal College of Music studying with Daniel Rowland and Sasha Rozhdestvensky, generously supported by the David Butler Trust and the Douglas and Hilda Simmonds Award.

Emma currently leads the Street Orchestra of London; described by the Guardian as “truly uplifting” this 40-piece ensemble aims to bring live orchestral performance to those unable to access it. Emma recently represented them as a guest speaker at the Association of British Orchestras Conference 2017. She is currently on trial with the Bournemouth Symphony Orchestra, and also works with various orchestras around the UK, including the Little Orchestra, Trafalgar Sinfonia, the Faust Ensemble, the Melos Sinfonia, the Orchestra of the Swan, leading the Kantanti Ensemble and co leading the Women of the World Orchestra. In her time at the Royal College of Music Emma led all the major RCM ensembles, including the RCM Symphony Orchestra in a performance for Steve Reich, the RCM Symphony Orchestra and Chorus and the RCM Opera Orchestra in Albert Herring, and privileged to be part of the Royal Philharmonic Orchestra’s Shoulder to Shoulder Scheme 2015-16.

Emma is an enthusiastic chamber musician, and her ensemble the Vasara String Quartet have appeared in multiple venues throughout the UK and abroad. These include appearances at the Wigmore Hall, the Elgar Rooms at the Royal Albert Hall, and Kings Place, and they have also performed at venues including Leith Hill Place and the British Ambassadors Residency in Paris. In 2014 they collaborated with Marc Danel of the renowned Quatuor Danel in a performance of Mendelssohn’s Octet at Wigmore Hall. Emma has also played with the award-winning Ruisi Quartet in the prestigious ‘ChamberStudio’ Masterclasses at Kings Place. Slightly alternative venues have included the Hammersmith Apollo alongside violinist Jack Liebeck and Professor Brian Cox, Kensington Palace and the National Portrait Gallery.

In her time at the RCM Emma was awarded RCM String Quartet of the Year 2012 and the Britten Intercollegiate Prize 2013. Following her time as a Leverhulme Chamber Music Fellow she now has the privilege of regularly coaching talented young chamber musicians at Pro Corda. Recent chamber events include the Roman River Festival where Emma appeared alongside esteemed musicians including Clio Gould, Rebecca Gilliver and members of the Navarra Quartet, and a celebration of Canadian contemporary music at the Royal Over-Seas League.

Emma has recently appeared in solo recital in venues including The Elgar Room in the Royal Albert Hall, St James Piccadilly and Lincoln’s Inn. She is a member of the Dovedale duo, a long standing musical friendship with pianist Eleanor Kornas and together they have performed notably as the New Generation Young Artists at the Stift International Festival in Holland, and in Cividale Del Fruili, Italy. Recent concerto appearances include Prokofiev Violin Concerto No.2 with the Hereford Symphony Orchestra and Street Orchestra of London, and Emma is looking forward to performing in recital at the Leeds International Concert Series.

Outside of her classical musical activities Emma can often be found performing with Rwandan singer and international peace advocate Jean-Paul Samputu, and has also appeared in a short film by Bohemia Junction which featured at both the Cannes and the British Independent Film Festival, as well as winning Best Short Film at the Rajasthan Film Festival 2017.