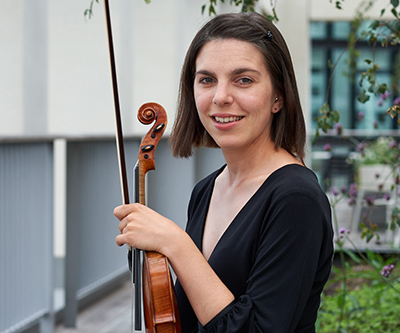 Francesca Barritt (violin) is equally at home as concert soloist, orchestral leader and chamber musician and enjoys a busy and varied freelance schedule. Recent solo engagements have included performances of Beethoven, Bruch, Brahms and Sibelius violin concertos, Brahms’ double concerto and Vaughan Williams’ The Lark Ascending. Increasingly in demand as a chamber musician, Francesca has appeared at Wigmore Hall and the Purcell Room, on BBC Radio 3 from the Bath Festival and for BBC Proms Radio 3 Composer Portraits. As well as her work with the Berkeley Ensemble, she is a member of the Del Mar Piano Trio and a founder member of Ensemble Matisse, who were selected as Park Lane Group Young Artists for the 2014 and 2015 seasons and perform contemporary chamber music repertoire in the UK, France and Belgium.

Francesca is the leader of Orchestra of St. Paul’s and is a regular member of the John Wilson Orchestra, appearing yearly at the BBC Proms, across the UK, on television broadcasts and numerous EMI recordings. Francesca also performs regularly with City of Birmingham Symphony Orchestra, City of London Sinfonia and Aurora Orchestra. Francesca studied at the Royal Academy of Music and Royal College with Yossi Zivoni and Richard Deakin.

Francesca in an experienced violin teacher, teaching privately in London and Hertfordshire, with pupils ranging from beginner level to post grade 8 to current members of the National Youth Orchestra of Great Britain. She also teaches regularly at Royal Academy of Music Junior Department as a deputy violin teacher.