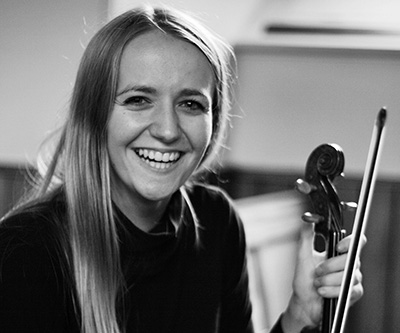 Hatty is a violinist currently in her first year of the Masters degree at the Guildhall School of Music and Drama where she studies with Stephanie Gonley and holds the John Welch Scholarship. She has just graduated from the Royal Academy of Music with a First Class Honours Bachelor of Music,and was awarded the prestigious J&A Beare bow prize upon graduating. Hatty studied with So-Ock Kim and was the recipient of the John Waterhouse Prize, Amadeus Prize, Sir John Barbirolli Prize and the Wolfe Wolfinsohn String Quartet Prize. She was also a participant on both the Asset Frost Chamber Music scheme and the Davey Poznanski Quartet scheme under the tutelage of Levon Chilingirian.

Hatty has performed extensively throughout the UK in venues such as Wigmore Hall, St John’s Smith Square, St James’ Piccadilly, Colston Hall, Regent Hall and LSO St Luke’s. She has also given concerts in HKAPA and St John’s Cathedral (Hong Kong), Alti Hall, Suntory Hall, Koriyama Concert Hall and Sogakudo Concert Hall (Japan). Hatty has appeared as a soloist with the Welsh Sinfonia and Wells Virtuosi, and has also performed live on BBC Radio Somerset. She was invited to perform at the Kyoto International Students Music Festival, and has performed at Vilalte Chamber Music Festival and Southwell Music Festival.

Enjoying a wide breadth of repertoire, Hatty has been studying the baroque violin for the past three years with Nicolette Moonen, and recently performed at Wigmore Hall with the Academy Baroque Soloists under the direction of Rachel Podger. Hatty is also highly interested in contemporary music and gained a coveted place on this year’s London Sinfonietta Academy. She is also the co-founder of 412 collective, a newly formed group exploring contemporary and experimental performance.

Hatty is incredibly grateful for the generous support of the John Welch Scholarship, the Countess of Munster Musical Trust, the Stephen Bell Charitable Trust, the Lumbs Educational Trust, the Kathleen Trust and the Albert Cooper Musical Trust. She plays a violin by Guiseppe Baldantoni from 1810, on loan from the Harrison-Frank Family Foundation.