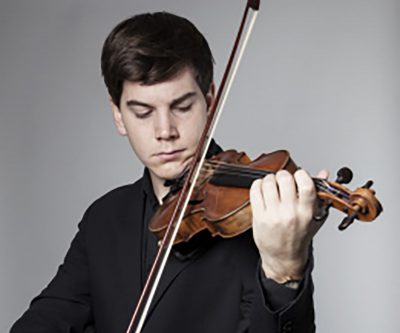 Henry Chandler was born in 1992 in London. He has recently finished the Artist Diploma course at the Royal College of Music, where he studied as a scholar with Maciej Rakowski. Henry received generous support from the John Lewis Partnership, Atwell Charity and Kathleen Trust during his time there. Prior to this, Henry read music at Pembroke College, Oxford University with an instrumental scholarship, and appeared as a soloist in the Sheldonian Theatre after winning the university’s concerto competition. He has played with numerous orchestras and conductors such as Bernard Haitink, Leif Segerstam, Sir Roger Norrington and Daniel Harding, and appeared in a masterclass with Maxim Vengerov in 2013. Past professional engagements include playing with the Philharmonia Orchestra and Royal Philharmonic Concert Orchestra in London, the Oxford Philomusica on the apprentice scheme offered by the university, and English National Opera, also on an apprenticeship scheme. Henry currently leads the Zeitgeist Chamber Orchestra. In June 2013, Henry was invited to the Ashmoleian Museum in Oxford to play one of the violins on display at the Stradivari Exhibition. Before going to university, Henry studied with Roger Smith at the RCM Junior Department, where he was awarded the Esther Coleman award for ‘outstanding musician’.

Henry currently plays on an eighteenth century instrument by Richard Duke of London on loan from the Harrison Frank Foundation.

‘An instrument of quality and versatility is imperative at this early, formative stage of a musicians career, and I am extremely grateful to the Harrison Frank Foundation for their generosity towards such musicians. The 1778 Richard Duke of London violin I have been lent is powerful, bright and exhibits an impressive range of colours.  I look forward to the musical challenges that I will encounter over the next few years, and relish the opportunity to face these challenges with an instrument of this calibre.’