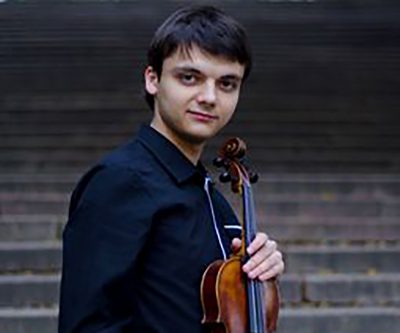 Born in Bender and raised in Chisinau (Republic of Moldova), Ionel Manciu took his first violin lessons from Tamara Caftanat and later Galina Buinovschi at the musical lyceum “C.Porumbescu” in Chisinau. He made his official debut at the age of ten with the Chisinau Chamber Orcehstra. From the age of eleven, Ionel Manciu has won numerous prizes at international competitions, such as: “Eugen Coca” in Moldova, “Remember Enescu”, “Paul Constantinescu” and “Ion Voicu” in Romania, “Mihail Strikharj” in Ukraine, “Nedyalka Simeonova”in Bulgaria, “Delphic Games” in both Moldova and Belarus, “M.A.G.I.C” and “Vasco Abadjiev” in Bulgaria.

Ionel has performed in many prestigious venues across Europe. They include the Casa de Musica in Porto, the Wigmore Hall, Barbican Hall and Milton Court in London, the Mozarteum Concert Hall in Salzburg and the Romanian Atheneum in Bucharest.Besides, Ionel has participated at numerous concerts held in Chisinau, St.Petersburg, Bucharest, Iasi, Hakovo, Sofia, Moscow, Minsk, Pori, Kiev, Odessa, Lvov, London and more.

Ionel is currently studying at the Guildhall school of Music and Drama under the guidance of Professor David Takeno and it’s generously supported by The Leverhulme Trust, The Derek Butler Trust, The Countess of Munster Musical Trust and Help Musicians UK.

‘I would to thank you and the Harrison Frank foundation for providing me with an instrument at this very crucial moment in my life. Without your support and the Pistucci I really don’t know what I would have done. And for that I want to say thank you.’