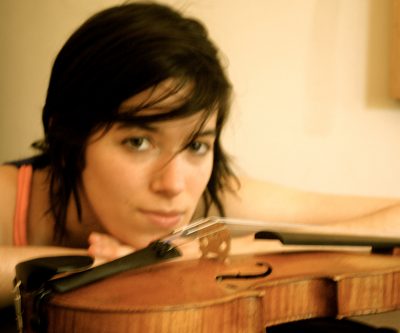 Portuguese violinist Joana started playing violin aged 4 and soon joined the Aveiro Conservatoire of Music where she studied with Ana Sofia Mota until she finished school. During the final 2 years, she also studied the viola with Hugo Diogo. In 2007 she went to the Academia Nacional Superior de Orquestra in Lisbon, where she continued her violin studies with Anibal Lima and chamber music with Alexei Eremine and Paul Wakabayashi.

She continued her studies at the Royal College of Music, London, with Radu Blidar for her Masters Degree, which she completed in 2013. During this time, she attended numerous festivals such as Harmus Festival, Stift International Festival, Aurora Chamber Music and Lake District Chamber Music. She also participated in Masterclasses for solo and chamber music, given by distinguished Professors including Gordan Nikolic, Daniel Rowland, Leonid Kerbel, Zoltan Santa and the Chilingirian Quartet.

During 2014, Joana spent a fantastic year as a member of Southbank Sinfonia – personal highlights include projects with the Academy of St Martin in the Fields and the Royal Opera House, concerts with the La Maîtrise Notre-Dame de Paris Choir and chamber and orchestral concerts in the Anghiari Festival. Joana is now freelancing in London and is looking forward to some exciting projects as the new second violinist of the Sattler Quartet.

Joana is grateful to have the support of the Gulbenkian Foundation, which enables her to continue her studies with Radu Blidar.