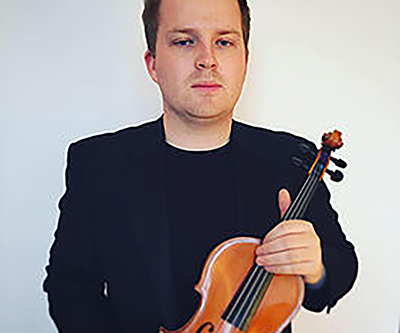 Joshua started learning the violin at the age of 5. Giving his first concerto performance at the age of 16, he has since performed in concert halls around the UK and Europe, in countries including Spain and Estonia. Joshua studied at the Royal Birmingham Conservatoire with Suzanne Stanzeleit, Ulla Benz and Zoe Beyers.

Since graduating he has established himself as a freelance player and teacher, recording film music, giving chamber music recitals and performing as violinist for musicals in theatres around the country

In September 2018, Joshua will be going to Manchester to study for a Masters of Music at the Royal Northern College of Music.

‘The loan of the Johannes Cuypers violin has helped me develop as a violinist and performer. Using this instrument has helped me find new sounds and colours in my repertoire which were not possible before. It has always been my dream to play on an instrument like this and I am so so thankful to the foundation for lending me this instrument.’