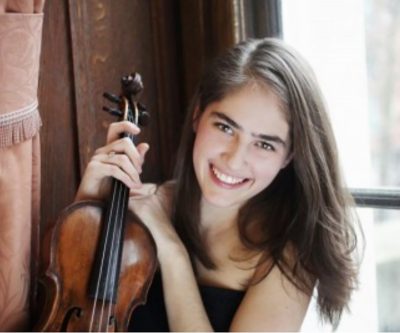 Júlia Pusker was born into a family of musicians and began her musical studies at the age of 5. In 2005, she entered the Special School for Young Talents, Preparatory Department of the Franz Liszt Academy of Music in Budapest, where she studied with Katalin Kokas and István Kertesz.

In 2014 she was a recipient of the prestigious Junior Prima Prize and Kodály Prize at her native Hungary. The 2015-2016 season includes concerto appearances with the Hungarian National Philharmonic Orchestra under Zoltán Kocsis, the London Mozart Players, the Franz Liszt Chamber Orchestra, the Pannon Philharmonic Orchestra, the Budapest String Orchestra, as well as chamber music concerts at ‘Aldeburgh Music Festival’, ‘Dino Ciani Festival’, ‘Two Moors Festival’ and further recitals in Spain, Hungary, England and Germany.From the 2016/17 season she has been selected as St. John’s Smith Square Young Generation Artist and Making Music Young Concert Artist.

Since September 2016, she is artist in residence at the Music Chapel, under the direction of Augustin Dumay.

‘Words cannot express my gratitude to the Harrison Frank Family Foundation for providing me an instrument since 2016. Without this generosity I could not be able to further my studies in Brussels and try to explore a musically more independent life in London.’