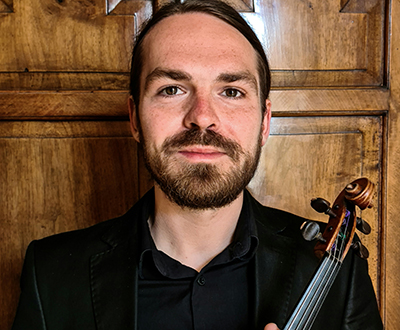 Violinist Jure Smirnov Oštir completed his Master’s Degree from the Royal Academy of Music London where he studied under the tuition of Levon Chilingirian and Remus Azoitei. He has received prizes in several international competitions, including first prize and the Alfredo Marcosig Award for the best violinist at the Ars Nova International Competition in Italy, first prize and overall winner at the Societa Jupiter Competition in Italy, the Gold Award at the Slovenian National Music Competition, the Sir John Barbirolli Memorial Award, and first prize at the CAVATINA Intercollegiate Chamber Music Competition. He has received masterclasses from Maxim Vengerov, James Ehnes, Sylvia Rosenberg, Igor Ozim, and also András Keller as part of the Wigmore Hall String Quartet Masterclass Series.

Jure has given both solo and chamber music recitals in Italy, including at the Teatro di Bibiena Mantua, Russia, Poland, Slovenia, Croatia, Austria and the United Kingdom. Recent solo and chamber music performances include recitals at St Martin-in-the-Fields, Freemasons Hall, Colston Hall, Royall Festival Hall, Regents Hall, Drapers’ Hall, the Halesworth Arts Festival, and the Haydn and Bartok Festival at the Royal Academy of Music. He has performed as soloist with the Mendelssohn Chamber Orchestra, and in 2014, he gave the world premiere of ‘Strune Strasti’ with the Domžale-Kamnik Symphony Orchestra, a work composed by renowned Slovenian composer Tomaž Habe. He also gave the world premiere performance of ‘Our Story’, for the BBC Grenfell Documentary with Gareth Malone, and a world premiere of ‘Quiet London’ for countertenor and string quartet by Alex Woolf, commissioned by the Arts Society. Jure has led the Royal Academy Symphony Orchestra, and worked with the English Chamber Orchestra, and the London Sinfonietta. He was selected to work closely with the London Philharmonic Orchestra as part of their Foyle Future Firsts programme in 2020/21.

Jure is supported by the Gallus Young Artist Trust. He plays on 1860 Francesco Maurizi violin, on generous loan from Harrison-Frank Family Foundation.