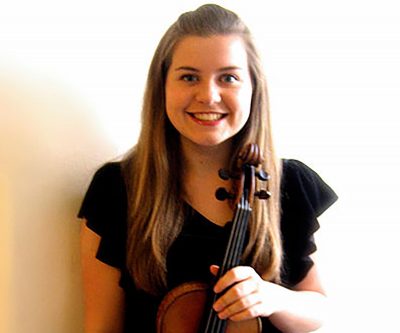 Katherine Waller recently completed her Masters in Violin with Distinction at the Royal Academy of Music, where she completed her undergraduate studies with First Class Honours in 2015. She studied under Clio Gould, having previously learnt with Maurice Hasson and has had masterclasses with Maxim Vengerov, Tasmin Little, Thomas Brandis and James Ehnes. At the Academy Katherine has frequently performed as a principal player in the Symphony Orchestra under conductors such as Sir Mark Elder and Semyon Bychkov.

As a freelance player, Katherine enjoys a versatile and diverse career. As an orchestral player she has performed with the London Mozart Players, Chroma Ensemble, EUYO, Trafalgar Sinfonia, Multi-Story Orchestra and Philharmonic Chamber of London in venues such as Royal Festival Hall, St Martin in the Fields, Cadogan Hall and St John Smith’s Square. As well as being a classical performer Katherine enjoys playing a diverse range of music, including Musical Theatre, Jazz, Pop and Bollywood.