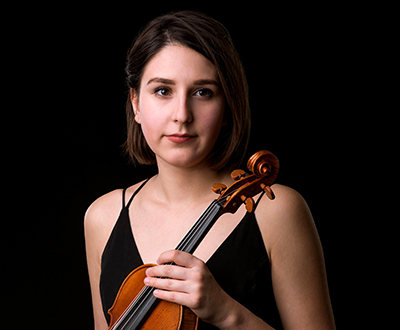 Born in Poland, Konstancja Smolorz began her violin studies at the age of 7. She attended Karol Szymanowski State Music School where she studied with Ewa Iwan and Adam Wagner. During that time she was a laureate of numerous prizes in many competitions, including the 1st Prize at the London Grand Prize Virtuoso Competition 2015, the 2nd Prize at the Paris Grand Prize Virtuoso Competition 201 and the 3rd Prize at the International ‘Young Paganini’ Violin Competition 2014 and she appeared as a soloist with the Silesian Philharmonic Orchestra and Silesian Chamber Orchestra. She was also a member of International Lutoslawski Youth Orchestra.
In 2015, Konstancja moved to London to study at Guildhall School of Music and Drama with Krzysztof Smietana. She then continued her studies at the Royal Academy of Music in London with Levon Chilingirian.
Konstancja performs regularly with many ensembles, such as the Orpheus Sinfonia, the Sinfonia Cymru, Amanzi Quartet and the London Panufnik Trio. She performed in venues such as Barbican Hall, Milton Court Concert Hall, Cadogan Hall, St John’s Smith Square, St Martin in the Fields, Studio S2 and NOSPR Concert Hall in Poland.

She has also participated in many masterclasses and received tuition from many renowned musicians, such as Martin Chalifour, Giovani Guzzo, Friedemann Eichhorn, Jennifer Pike, Tom Poster, Caroline Presland, Krzysztof Smietana, Ralf Gothoni, the Danish String Quartet and the Gould Trio.
Konstancja plays on a violin by Charles Jean-Baptiste Collin-Mezin (1893) on loan from the Harrison-Frank Family Foundation.
https://encoremusicians.com/Konstancja-Smolorz