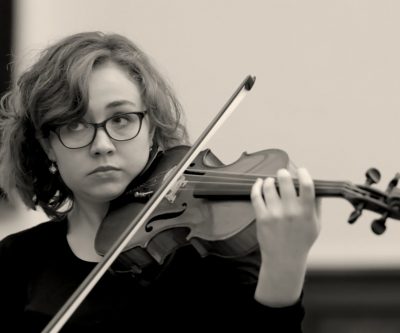 South African violinist Lieva Starker studied under Jan Repko and Jiafeng Chen at Birmingham Conservatoire where she received a BMus(Hons) degree (first class) in July 2017. She will study toward a Masters in Music Performance at Birmingham Conservatoire under the tutelage of Pavel Fischer, Oliver Wille and Jiafeng Chen in September 2017. She is a keen recital, chamber and orchestral musician and enjoys teaching as well.

Lieva has performed as a soloist with the Cape Philharmonic Orchestra and KwaZulu-Natal Philharmonic Orchestra. She made her debut as a recital artist in a national tour alongside pianist Anneke Lamont in 2015. Lieva has been the deputy concertmaster for the City of Birmingham Symphony Youth Orchestra and has performed in chamber music with the likes of Leon Bosch, Pavel Fischer, Hannah Roberts, and Louise Lansdown.

Lieva is passionate about new music. She has performed works of Sean Clancy with the Thallein Ensemble. She also performed in the 2016 Unyazi electronic music festival in Cape Town where she, along with Waldo Alexander, Marguerite Spies and Piet de Beer, premiered works by João Orecchia, Njabulo Phungula and others. She released her debut album, Weerspieëlings, earlier this year.

As a teacher, Lieva is involved with the ARCO outreach programme in Soweto, South Africa. She also volunteers as a tutor in the Melody Music Birmingham Programme for children with learning difficulties.

‘Thank you again so much for the opportunity of having the violin the last two years, it has meant a lot to me.’