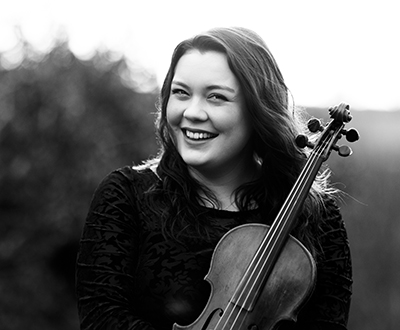 Welsh violinist Lily Whitehurst graduated from the Royal Northern College of Music in 2019, where she studied with Yossi Zivoni. She currently lives in Manchester, having recently been appointed as Sub-Principal 2nd Violin with the BBC Philharmonic.

Lily started with the BBC Philharmonic in 2018 as a Tutti 2nd Violin alongside a varied freelance career playing with orchestras such as Manchester Camerata, the Hallé, CBSO, Bournemouth Symphony Orchestra, RLPO, Royal Northern Sinfonia and Sinfonia Cymru.

Lily is also a keen chamber musician, playing with a variety of ensembles, and has recently enjoyed working with Manchester Collective at the Lake District Summer Music Festival and at their BBC Proms debut in 2021.

During the Covid-19 lockdowns, Lily threw herself into the BBC’s exciting online education programme, working with schools across the Northwest. She also recorded Ben-Haim’s Sonata for Solo Violin which was broadcast on BBC Radio 3.

Lily currently plays on a Mark Robinson violin kindly on loan from the Harrison-Frank Family Foundation.