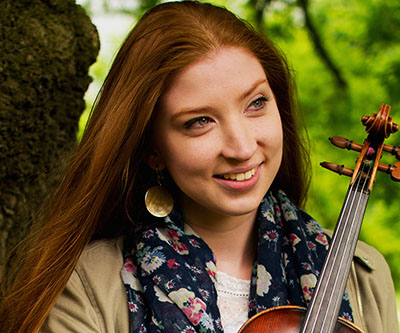 British-Polish violinist Magdalena Loth-Hill studied at Chetham’s School of Music with Jan Repko and the Royal College of Music with Itzhak Rashkovsky (baroque violin with Adrian Butterfield and Lucy Russell). Magdalena was awarded the 2015/16 Mills Williams Junior Fellowship, a post she held alongside studying for an Artist Diploma in baroque violin.

Performing on both modern and period instruments, Magdalena has recorded works with the English Concert, Florilegium, for the British Library ‘Georgians Revealed’ exhibition and the most recent ABRSM syllabus. She has worked with the Academy of Ancient Music, The Orchestra of the Age of Enlightenment, English Baroque Soloists, The King’s Consort and Ex Cathedra. Magdalena performed Bach’s E major concerto, Brandenburg Concerti 4 and 5 and the Bach Double Violin Concerto with the RCM Baroque Orchestra as well as the Mendelssohn and Bruch Violin Concerti with the City of Carlisle Orchestra. In 2016, Magdalena was invited to Bolivia, where her two solo recitals as ‘Artist of the Festival’ officially opened the 2016 Misiones de Chiquitos Festival.

Magdalena is a founding member of period string quartet, Consone, who won the EUBO Prize and a place on the Emerging Scheme at the 2015 York Early Music Festival Competition and went on to win the Ensemble Prize at the 2016 Royal Over-Seas League Competition. The group made their Wigmore Hall debut in a shared recital in July 2017 and recorded their first CD on the Ambronay label in April 2018.

‘Thank you so much again for the generous loan of this wonderful instrument. It has been a pleasure and an honour to have the use of it and I am glad to hear that someone else will be benefitting from it soon, too!’