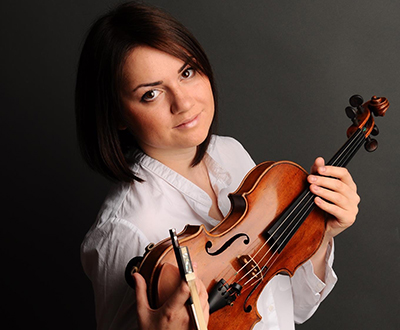 Maria Oguren is a Russian violinist based in the UK. Born in Saint-Petersburg, Maria began to play violin and piano at the age of six. She went on to study at the Music college of N.A Rimsky-Korsakov in Saint-Petersburg. From 2009, Maria studied at the Royal Academy of Music, London with Professor Tomotada Soh and Erich Gruenberg, completing a BMus (Performance) and then went on to complete two years of further study at the Royal Birmingham Conservatoire. (Prof. Nathaniel Vallois and Oliver Wille).

During her studies, Maria has won several prizes and awards, among them 1st prize as a member of a trio at the International Competition of S.V Rachmaninov (St-Petersburg), Winifred Small Solo Violin Prize at the Royal Academy of Music, Sylvia Cleaver Chamber music Prize and Meher Rohi Gazder award.

She has appeared as a soloist and a chamber musician at the leading concert halls, including Wigmore Hall, Saint-Petersburg Philharmonia, Steinway Hall and Larnaca Municipal Theatre. Maria took a part at the Britten-Pears Young Artist Programme as a part of the Britten-Pears Orchestra and became a member of the Southbank Sinfonia 2017. She has performed at different festivals across the UK and the Europe and has been broadcasted live on BBC Radio 3 programme “In Tune”.

In January 2019, Maria was appointed as Tutti First Violin with the Orchestra of the Scottish Opera.

Maria plays on a Gand & Bernardel c.1885 violin, generously on loan from the Harrison-Frank Family Foundation.