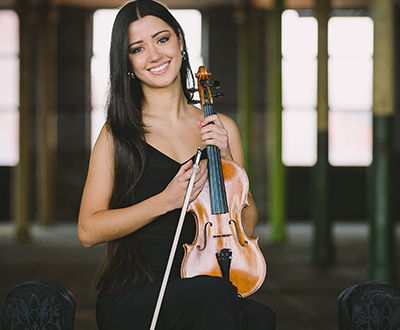 Nadia was born in Stara Zagora, Bulgaria. She was accepted to study at Chetham’s School of Music aged ten, before completing her Bachelor of Music degree at the Royal College of Music, studying under Prof. Radu Blidar.

As a soloist, Nadia has performed in recitals across the UK and participated in masterclasses with violinists including Alf Richard Kraggerud, Pavel Fischer and Thomas Zehetmair. She has also been featured by platforms Halidon Music and Classic FM.

Orchestrally, Nadia has performed in an extensive number of venues including the Royal Festival Hall, Cadogan Hall, Bridgewater Hall and the Cheltenham Festival. In 2018, Nadia obtained a place in the Britten-Pears Young Artist Programme, led by Marin Alsop.

Whilst studying at the Royal College of Music, Nadia had the privilege of performing at renowned venues, including recording at Abbey Road Studios and performing at Buckingham Palace alongside conductor John Wilson and violinist Maxim Vengerov.

She has now established herself as a freelance player with pursuits leading to chamber performances at Kensington Palace and the House of Lords.

Nadia plays on an Italian violin by Francesco Maurizi, generously loaned to her by the Harrison-Frank Family Foundation.