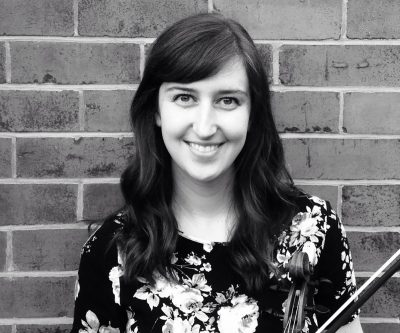 Ruth Sanderson grew up in York and began learning the violin aged 2. She went on to read Music & Mathematics at the University of Birmingham, studying violin with Kath Gittings. During her time there she led the University Orchestra and was co-leader of the CBSO Youth Orchestra in her final year. She also sang with the CBSO Chorus, and had the privilege of singing with the Berlin Philharmonic and Sir Simon Rattle, and at the BBC Proms with the CBSO and Andris Nelsons.

After a year working in orchestral management at the CBSO, Ruth moved to Manchester in 2015 to study for a Master of Music in Performance at the Royal Northern College of Music with Steve Wilkie. Whilst at the RNCM, Ruth enjoyed many playing opportunities including with the Mahler Chamber Orchestra Academy in Germany under Daniel Harding, and the Britten-Pears Orchestra with Marin Alsop in London and Snape Maltings. Ruth played regularly as a principle in the RNCM orchestras, and enjoyed two tours to Montepulciano, Italy with the RNCM Symphony Orchestra as part of the Cantiere Internazionale d’Arte.

Ruth plays 1st violin with the Ellison String Quartet, founded at the RNCM, who regularly give recitals and education workshops in the North-West of England. They were lucky to receive coaching at the RNCM from members of the Elias, Talich and Solem Quartets. Ruth has also worked for Manchester Camerata and Lancashire Music Service in delivering outreach work. She enjoys playing annual duo recitals in York with her brother and pianist, James Sanderson.

Ruth is extremely grateful to the Harrison Frank Foundation for the loan of an Italian violin by Anselmo Gotti.