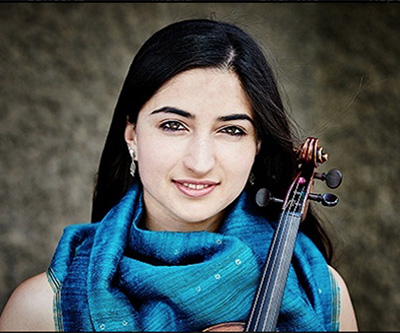 Over the last year Savitri has returned to Wigmore Hall both as soloist, and with the IMS Prussia Cove Ensemble. She toured throughout China, and collaborated with the renowned sarod players Amaan Ali and Ayaan Ali Bangash at The Times Swarsangam Music Festival in Bangalore.

Savitri read music at Christ Church, Oxford and in 2017 completed her Artist Diploma with distinction at the Guildhall School of Music and Drama with David Takeno. She is currently at the Universität der Künste Berlin in the class of Nora Chastain on a full DAAD scholarship.

Sought after as a chamber musician she has collaborated with Susan Tomes, Christoph Richter, Steven Isserlis, Kryzstof Chorzelski, Tom Poster and the Kaleidoscope Chamber Collective, Richard Uttley, Andrew Marriner and Alasdair Beatson, and regularly gives recitals with the Grier Trio.

During her studies Savitri participated in masterclasses with Ferenc Rados, Johannes Goritski, Maxim Vengerov, Anne-Sophie Mutter and Thomas Adès, and was especially grateful for guidance from Ana Chumachenco and Andras Keller. Awards include 1st Prize at the Oxford Philomusica and Tunbridge Wells International Competitions. She was selected for representation by Young Classical Artists Trust in 2015.

​Savitri plays on a Matteo Goffriller violin on generous loan from the Aidan Woodcock Charitable Trust.