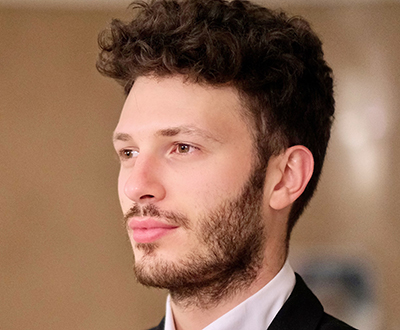 Simone Pirri (1994) is an engaging and rising young violinist who specialises in period instrument performance.
A sought-after recitalist, leader, chamber musician and orchestral player, Simone regularly performs with some of the world’s most renowned early music ensembles including Il Pomo d’Oro, La Serenissima, Ensemble Diderot, Holland Baroque, Collegium 1704, Arcangelo, Brecon Baroque and La Nuova Musica. He has also appeared with several other groups such as the Orchestra of the Age of the Enlightenment, Les Musiciens du Louvre, Theresia Orchestra, Pietà de Turchini, La Chimera and Echo di Rheno (Reinhard Goebel) and is currently the regular leader of Eboracum Baroque (UK) and New Trinity Baroque (Serbia/UK).
Recipient of several awards, Simone was the winner of the London Belsize Baroque Leader Scholarship in 2018 and was a Handel House Talent Artist in 2020/2021.
He is a recent graduate of the historical performance departments of both the Royal Academy of Music in London and the Royal Welsh College of Music and Drama in Cardiff where he studied baroque violin with Rachel Podger, Simon Standage and Nicolette Moonen.
Since September 2020 he has been teaching baroque violin and viola at the Belgrade Baroque Academy in Serbia and leading the Academy Baroque Orchestra. He has appeared as guest soloist in Kolarac National Concert Hall in Belgrade during the Belgrade Early Music Festival 2021.
​
Simone plays on a Pietro Paolo De Vitor (1730-40, Venice) on generous loan from the Harrison-Frank Family Foundation.
www.simonepirri.com