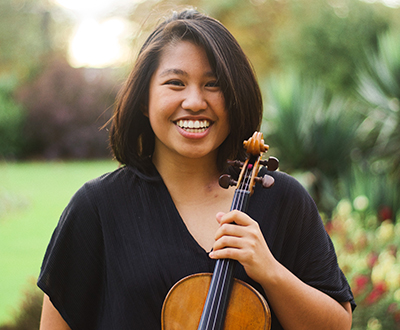 Filipino-American violinist Sydney Grace Mariano graduated with a Masters from the Royal Academy of Music in 2021 with Distinction and was awarded a DipRAM for outstanding performance. She is now continuing her studies in London under the mentorship of Ying Xue of the Doric String Quartet.

Before relocating to London, Sydney earned her Bachelor’s in Violin Performance in Southern California at the USC Thornton School of Music. During her life in the States, Sydney has performed at venues such as the Walt Disney Concert Hall and has made her solo debut with orchestra at the Segerstrom Performing Arts Center. Sydney also has a deep love for film music, having recorded in a number of Hollywood spaces such as Warner Bros. Studios.

A passionate chamber musician, Sydney is currently 2nd violinist of the Kyan Quartet. For two years the Kyan Quartet have been beneficiaries of the RAM Frost Advanced Specialist Strings Ensemble Training scheme, through which they receive specialist coaching from Alex Redington of the Doric String Quartet. They were awarded 1st place in the 2021 RAM Wolfe Wolfinsohn String Quartet Competition and were also selected to take part in the Britten-Pears Young Artists Programme Chamber Music Lab and will hold a week residency in spring of 2022.

Recently, Sydney has also been playing regularly with the Chineke! Orchestra, teaching as one of the Academy’s fellows at First Strings Experience, and is proudly playing at St. James’s, Piccadilly Church as one of their music scholars. Sydney is grateful to be playing on a 1787 Gragnani, generously loaned by the Harrison-Frank Family Foundation.