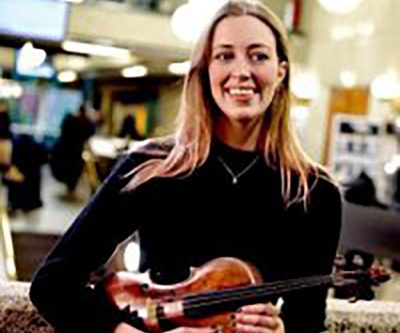 Born in 1991, violinist Venetia Jollands is currently studying at the Guildhall School of Music and Drama with David Takeno, where she is generously supported by the Guildhall School Trust. She previously studied with Krysia Osostowicz, receiving First Class Honours, the Donald Weekes Memorial Prize and the Concert Recital Diploma from her undergraduate studies at the Guildhall School. Venetia has had opportunities to perform as a soloist and chamber musician in a number of venues throughout the UK such as the Barbican Centre, Wigmore Hall, Kings Place, Salisbury Cathedral, Cadogan Hall and the Southbank Centre as well as abroad in Latvia, China, Hong Kong, Switzerland, Germany and France.

Recently, Venetia has performed live on Radio 3 as well as in the Barbican’s ‘Illuminating Britten’ series, in the City of London festival with the Volta Quartet and in the LSO’s pre-concert series. She has participated in masterclasses with distinguished artists such as Andras Keller, Nikolaj Znaider, Rodney Friend, Ferenc Rados, Erich Hobarth, Leland Chen, Maciej Rakowski and members of the Belcea, Takcas, Alban Berg and Endellion quartets.

Venetia has taken part in numerous festivals and concert series around the world including IMS Prussia Cove, Britten Pears Young Artist Programme, Cadenza International Summer School and Lausanne Summer Academy, where she has collaborated with many of the world’s most prominent musicians.

Venetia plays a violin by Vincenzo Panormo c.1800, which is on kind loan by the Harrison Frank Foundation.