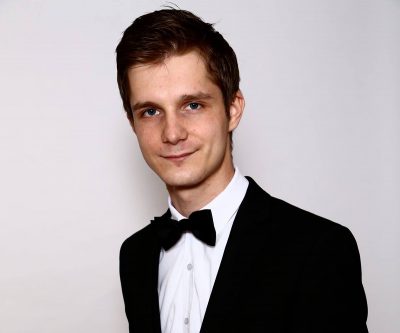 Victor is a Romanian free-lance violinist based in London.

Victor gave his first public performance at the age of eight. He started lessons in his hometown where he completed secondary school and won second prize at national music competition in Ploiesti -Romania.

In 2007 he moved to Valencia to continue his studies and entered with the highest mark in the audition for admission. In 2013 he accepted an offer from Trinity Laban Conservatoire and won a bursary. His artistry has been honed in masterclasses by many famous musicians such as Rivka Golani, Michael Bochmann, John Crawford, Ofer Falk, Mayumi Fujikawa, Mauro Rossi, Yaron Thaub, Mirabai Weismehl.

Currently Victor is preparing for orchestra auditions after he finished undergraduate at Trinity Laban conservatoire with a Second First Honours Degree in 2017 studying with renown violinists Boris Brovtsyn and Lana Trotovsek.

‘I am very fortunate to be able to play on the Carlo Carletti violin loaned by the Harrison Frank foundation. After finishing my undergraduate the only option was to play on my own violin but I could not do much with it technically or acoustically. I love the rich vibrant lower strings and the bright and balanced upper strings. Every note has a clarity and resonance that amazes me. It is a delight to play every day on this instrument.’