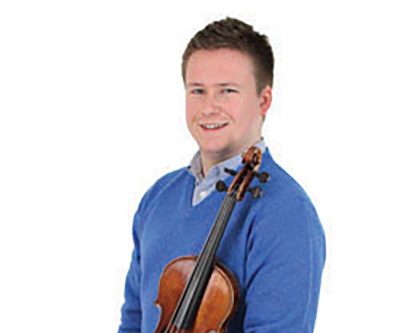 Born into a musical family in Belfast, Scott began learning the violin with his father, a peripatetic music teacher, whilst on a family camping holiday. Scott’s mother is a cellist with Ulster Orchestra and his brother a viola player, so the family have an in-house string quartet.
A former pupil of the Belfast School of Music, Scott enjoyed a busy musical school life, culminating in being appointed Leader of the Ulster Youth Orchestra. Scott was awarded a scholarship to study at Royal Conservatoire of Scotland, where he led the Conservatoire’s Symphony Orchestra and graduated in 2013 with the highest award for Contribution in Orchestral Studies.

Scott moved to London to continue his studies with a master’s at the Royal Academy of Music, and attended the Cambridge International String Academy during the summer of 2015. During his studies, Scott has relished the opportunity to perform in master classes with leading soloists including Tasmin Little, Jennifer Pike, Peter Manning, the Brodsky String Quartet and Maxim Vengerov.

Whilst studying in Glasgow and later in London, Scott has secured some very diverse and exciting professional engagements, including with Scottish Ballet, Ulster Orchestra and
Northern Ireland Opera, as well as with artists including Andrea Bocelli, Phil Coulter and Ad Parnassum.

Scott has an eclectic music taste. He is a keen drummer and was a member of the Ulster Youth Jazz Orchestra. He also enjoys hosting open mic evenings and has even written some of his own material.

In his downtime, Scott enjoys running, golf, fine arts, reading, travel and dreams of owning an old Italian violin. Whilst at school, Scott trained as a chef so he also enjoys good food and fine wine.

‘I have absolutely LOVED playing the instrument and feel extremely fortunate that I was given the chance to perform with it. It has totally transformed my playing and I hope whoever takes it out next has as much joy and success as I have!’