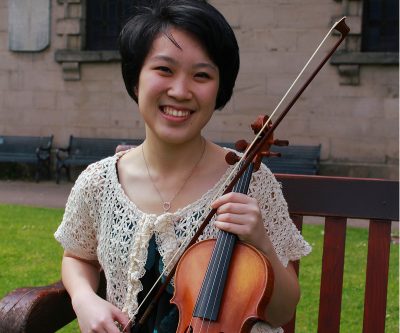 Taiwanese violinist Yu-Mien Sun has a rapidly growing reputation as a chamber and orchestral musician in the UK, Europe, Malaysia and Taiwan. Born into a musical family, Yu-Mien began her musical education on the piano at the age of 3 and found the love for violin playing when she was 6. She moved to the UK in 2007 to pursue further studies on the violin with Carmel Kaine and Philip Gallaway. In 2013, Yu-Mien continued her studies as a scholar at Birmingham Conservatoire, under the tutelage of Nathaniel Vallois, where she graduated with a First-Class Honours Degree in Music. While she was an undergraduate student at Birmingham Conservatoire, Yu-Mien has also worked with CBSO as a participant of its training scheme.

Yu-Mien now enjoys a wide and varied performance career, appearing in prestigious venues including Barbican Centre, Royal Festival Hall, Royal Albert Hall, Symphony Hall and a number of BBC TV Broadcasts. She has performed in many music festivals in the UK as a soloist such as the Malcolm Arnold Festival and Lake District Summer International Music Festival. She has also performed professionally with Michael Seal, Ulrich Heinen, Robin Ireland, Daniel Tong and Julian Jacobson.

Yu-Mien is the founder of Verbunkos Trio, a newly establish chamber group specialized in music written for clarinet, violin and piano, winner of Town Hall and Symphony Hall Prize 2017. She is also a founding member of Fletcher Quartet, together with pianist Domonkos Csabay they won the Sylvia Cleaver Chamber Music Prize 2017. The season 2017-2018 will see Yu-Mien performing widely in the UK, Europe and South Africa with these two groups, and regular engagements with Sinfonia Cymru.

Meanwhile, Yu-Mien will continue her postgraduate studies at Royal Academy of Music with Jack Liebeck, supported by scholarships from Academy’s Awards Committee and the Craxton Memorial Trust.