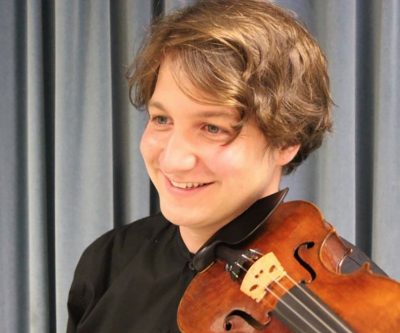 Alessandro Ruisi has rapidly developed an outstanding reputation as a soloist and chamber musician. He has appeared at many major festivals and concert venues across the UK, Europe, the US and Israel, and has recorded a number of live broadcasts for BBC Radio 3 and Kol Ha Musica. Recent prizes include the Emily English Scholarship from Help Musicians UK, the Philharmonia Meyer Foundation Award and a place on the Countess of Munster Recital Scheme, which will see him perform extensively throughout 2015/16.

Alessandro is 1st violinist of the Ruisi Quartet in which he performs with his brother Max. The quartet have recently been awarded a Royal Philharmonic Society award for young chamber groups, the Tunnell Trust Music Club Award and a residency at the Wye Valley Festival for 2016. They have also been recipients of the Chamber Studio Mentorship Scheme, receiving coaching from many of the world’s most eminent musicians and reached the finals of the 2015 YCAT auditions at the Wigmore Hall.

Alessandro is also co-leader of the European Union Chamber Orchestra and the 12 Ensemble and regularly performs with the Philharmonia Orchestra. He appeared at the 2014 BBC Proms with the Endymion ensemble.

This violin has a beautifully warm and deeply rich complexity. It blends extremely well within my quartet yet has the carrying power to soar above the texture.