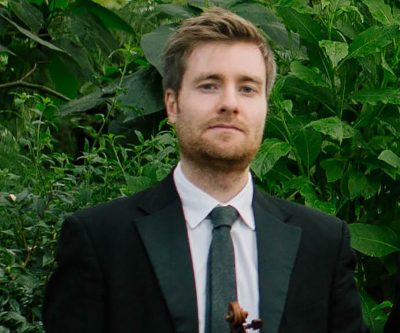 George began learning to play the violin at the age of ten. His interest in folk music inspired him to choose the instrument, and go on to study at the Royal Conservatoire of Scotland. Whilst there he studied with William Chandler and Ruth Crouch, performing in masterclasses with Christian Tetzlaff, Ilya Gringolts, and Midori.

He is a founding member and violinist of the Maxwell String Quartet,1st Prizewinner and Audience Prizewinner at the 9th Trondheim International Chamber Music Competition in 2017. The Strad Magazine has described the quartet’s performances as “superb storytelling by great communicators”.

The quartet performs regularly across the UK and abroad, at venues including London’s Wigmore Hall, Purcell Room, and St Martin-in-the-Fields, and the quartet is currently on the Park Lane Young Artist Programme, the Tunnell Trust Awards Scheme, and the Kirckman Concert Society programme.

After their success at Trondheim in 2017, the quartet’s 2017-18 season sees concert engagements across Europe including Denmark, Norway, Germany and the Netherlands.

George works with many other groups in Scotland including the Scottish Ensemble, BBCSSO and Grit Orchestra. He regularly works with non-classical musicians, collaborating with composers including Anna Meredith and Samoyed. Along with this he teaches at various institutions across Scotland and is regularly invited to give workshops and masterclasses on Scottish music.

He has performed across the UK and further afield as a chamber musician, soloist and Scots fiddle player. Notable performances include winning prizes in the Glenfiddich Fiddle Championship, performing James MacMillan’s ‘From Ayrshire’ for Solo Violin and Orchestra under the baton of the composer, and most recently performing in the Cuillin Mountains on the Isle of Skye.

George performs on a Bernardus Calcanius violin which dates from c.1740. and is extremely grateful to the Harrison-Frank Family Foundation for this generous loan.