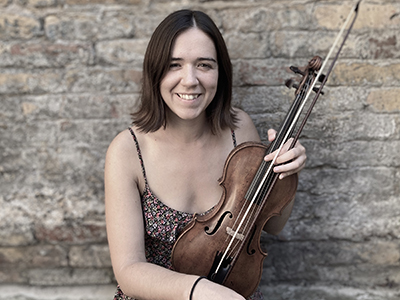 Rebecca Bell is a recent graduate of the Royal Academy of Music, where she received her Masters with Distinction, and was awarded a DipRAM Prize for outstanding performance in the final recital. Rebecca enjoys a wide variety of work with both modern and baroque ensembles, which have included the Orchestra of the Age of Enlightenment, the Royal Northern Sinfonia and the LSO, and is thrilled to have recently successfully auditioned for work as an extra with the Hallé and the Gabrieli Consort. She is regularly invited to guest lead ensembles at festivals and concert series across the UK, and very much enjoys the opportunities for creative input that this brings. As an in-demand chamber musician, Rebecca performs regularly with her award winning quartet, The Bell Quartet, as well as being a founding member of The Nuevo Tango Quintet, with whom she has given sell out concerts across London, featured on BBC Radio 3’s ‘In Tune’ with Sean Rafferty, and performed in the final of the Royal Overseas League Competition in 2020.

Last year, Rebecca was awarded the prestigious Enlightenment Scholarship to continue her studies at the RAM, undertaking a Professional Diploma in baroque violin with Pavlo Beznosiuk and Rachel Podger. In spite of the pandemic, she had the opportunity to participate in some exciting projects at the Academy, including the renowned Bach Cantata series, and was chosen to lead some of the projects and to perform obbligato parts in live-streamed performances alongside guest directors such as Rachel Podger and Laurence Cummings.

Outside of her musical endeavours, Rebecca enjoys crochet, vegan doughnuts and life by the sea in Brighton where she lives with her partner Rhys and young daughter Rosalie.