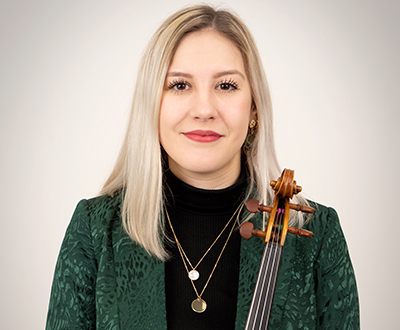 Sophie-Louise Phillips started learning the violin aged seven in her hometown of Northampton, where she progressed through their county music trust, leading the County Youth Orchestra and taking part in numerous other ensembles. During this time she was also a member of the National Youth Orchestra of Great Britain for 3 years, with whom she performed at the BBC Proms and Buckingham Palace.

In 2014 she moved to London to study at the Royal College of Music with Ani Schnarch, and later for a masters at the Guildhall School of Music and Drama with Krzysztof Smietana. Whilst in her first year at RCM, Sophie formed her piano trio, Trio Rouge. They continue to perform extensively across London and the UK including on BBC Radio 3’s In Tune, Buxton International Music Festival, and they held a successful residency at Music at Brel in the South of France.

After leaving college, Sophie was a member of the Southbank Sinfonia for two years and now enjoys a varied freelance career, including chamber music, orchestral playing and teaching. She regularly freelances with orchestras including the London Philharmonic Orchestra, Philharmonia, City of Birmingham Symphony Orchestra, Bournemouth Symphony Orchestra and The Hallé.
Sophie is grateful for the loan of a violin by Dante Guastalla (1920) from the Harrison-Frank Family Foundation.
https://www.southbanksinfonia.co.uk/musicians-profile/sophie-phillips/