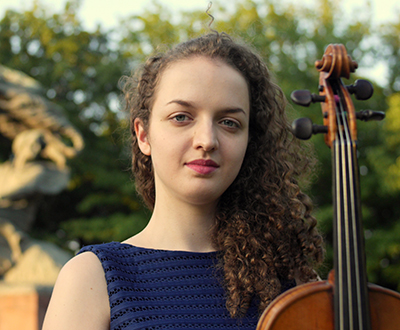 Veronica Marziano is a violinist of Polish, Venezuelan and Italian descent. She is an active orchestral, chamber and solo performer – a graduate of the Royal Academy of Music where she studied with Giovanni Guzzo and Nicholas Miller as a recipient of the Derek Butler London Scholarship and Robert Rendell Memorial Prize, and obtained her First Class Bachelor of Music degree as well as a Master of Arts degree with Distinction. Following her graduation Veronica was accepted into the Glyndebourne Opera ‘Pit Perfect’ Scheme as well as the Southbank Sinfonia fellowship where she has held the role of concertmaster on numerous occasions.

Veronica enjoys a wide variety of freelance work with various orchestras across UK, including: BBC National Orchestra of Wales, Orpheus Sinfonia, Arch Sinfonia, English Touring Opera, Piccadilly Sinfonietta, Hastings Philharmonic. She has been invited to play at various international festivals such as Pacific Music Festival in Japan (2019), Davos Festival in Switzerland (2018), New Generation Festival in Italy (2018), Sziget Festival in Hungary (2017) and has worked with and received coaching from leaders of some of the most renowned orchestras such as LSO, Philharmonia Orchestra, Vienna Philharmonic, Royal Opera House, Metropolitan Opera, Academy of St Martin in the Fields, Camerata Salzburg and O/Modernt.

Veronica is a member of the Amanzi Quartet – prize winners at the 2018 St Martin’s Chamber Music Competition who were selected as 2019/20 Concordia Foundation Artists and with whom she performs regularly in venues around UK. She also enjoys teaching and outreach work and has recently completed a Postgraduate Certificate of Education in Group Instrumental Learning with Music Masters and Birmingham City University, having previously been awarded the Licentiate of the Royal Academy of Music in violin teaching with distinction.

Veronica plays on a violin by Joannes Maria Valenzano (1824) kindly on loan from the Harrison-Frank Family Foundation.