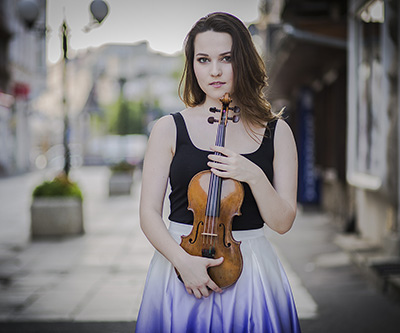 Since her solo debut at the age of eleven, Ada’s career has seen her perform widely in her homes of London and Poland in a broad range of styles. She performs all music from baroque to contemporary and is no stranger to the modern or period violin having performed with the Gabrieli Consort, The English Concert, Wroclaw Baroque Orchestra and Florilegium to name a few. Since then she has performed in such venues as Buckingham Palace, the Royal Festival Hall, the Royal Opera House, Barbican Centre, St Martin-in-the-Fields, Cadogan Hall, St John’s Smith Square, National Portrait Gallery, the Royal Albert Hall, Palazzo Pallavicini-Rospigliosi, Gothenburg Concert Hall and National Forum of Music in Wrocław, amongst others.

She has won several prizes at international violin competitions, including an Honourable Mention at the Greater Poland Music Competition and at the Polish Forum of Young Instrumentalists. Together with pianist Inna Montesclaros (appearing as ‘Nox Duo’) they won 3rd prize at the Rising Stars Grand Prix – International Music Competition in Berlin. She has also recently been appointed leader of Belsize Baroque Orchestra in London.

Ada was awarded the Star Award by the Countess of Munster Musical Trust, the Margot MacGibbon Award and Anthony Edward Brookes Award and the Belsize Leader Scholarship. She is also generously supported by the Henry Wood Trust, Stephen Bell Charitable Trust and Grabowski Foundation. Big pleasure for her was to belong to the Youth Jury in the 14th International Henryk Wieniawski Violin Competition.

Born in Poland in 1993 Ada studied at POSM of M. Karlowicz in Poznan before moving to UK for further studies. Since then Ada’s teachers have included Itzhak Rashkovsky, Michal Cwizewicz and Catherine Martin at the Royal College of Music and Levon Chilingirian and Simon Standage at the Royal Academy of Music in London. Ada plays a 18th century Cremonese violin kindly on loan from the Harrison-Frank Family Foundation.