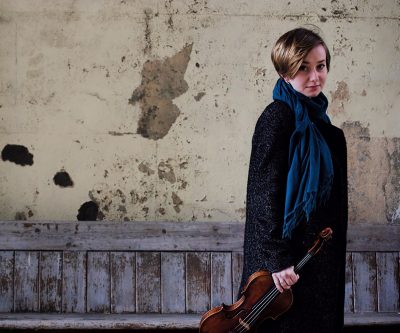 Lithuanian-Polish violinist Agata Daraskaite performs regularly on both modern and period instruments. Agata studied at the Yehudi Menuhin School and the Royal College of Music and has performed all around the UK since moving here in 2003.

In 2013 Agata became a member of the Kremerata Baltica Chamber Orchestra, lead by Gidon Kremer, with which she has since toured Europe, the Middle East, the Far East, South and North Americas.
Agata is also a keen chamber musician and takes an active interest in historical performance. This has led to creating the Consone Quartet, a group exploring classical and early romantic chamber music repertoire on period instruments.

Agata is a Keshet Eilon alumna and has taken part in the Chamber Music Connects the World festival, where she performed chamber music with A. Weithaas, S. Isserlis and C. Tetzlaff.
In July 2014 she completed her Masters Degree at the RCM with Distinction and two special prizes – the Jacqueline Ward Memorial Prize and the Queen Elizabeth The Queen Mother Rosebowl for outstanding studentship which she received from HRH Prince Charles at an annual award ceremony at the RCM.