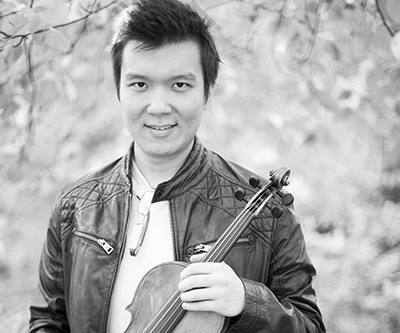 Djumash Poulsen is a British violinist of Kyrgyz (Central Asian) descent. Djumash played with Yo Yo Ma’s Silk Road Ensemble as a child, when they did their tour of the Silk Road trail. This event inspired him to pursue music as a life long passion.

​Djumash is active as soloist, chamber recitalist and orchestral musician having performed in major venues such as the Wigmore Hall, Santander Philharmonic Hall (Spain), Royal Festival Hall, Kazakhstani Philharmonic Hall and the CSO Concert Hall (Ankara, Turkey), KKL Hall in Lucerne, Benedict Music Tent in Aspen (USA). He has also performed at the House of Lords at Westminster palace.

​After being a student at the Yehudi Menuhin School he did his Bachelors at the Royal College of Music. This was followed by a Masters degree at the Royal Academy of Music under the tutelage of Rodney Friend on a scholarship.

​He had the privilege of acting as assistant teacher for Naoko Tanaka at the Aspen Festival 2018, where she entrusted him with teaching responsibilities.

​He regularly plays with the English Chamber Orchestra, recently acquired a trial with the Royal Philharmonic Orchestra. He held a permanent seat in the Aspen Chamber Orchestra 2018, playing alongside Robert Chen (principal of Chicago Symphony) and with conductors such as Vassily Petrenko.