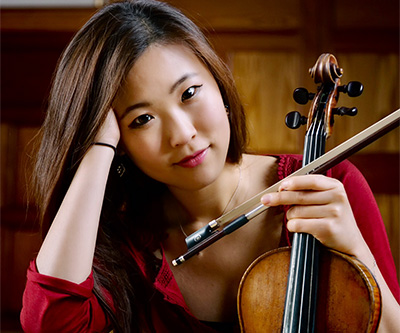 Eunsley Park is a rising British/South Korean violinist based in London.

Eunsley has performed as soloist with orchestras such as the Warsaw Philharmonic Orchestra, Guildford Symphony Orchestra, London Chamber Orchestra, the Yehudi Menuhin School Orchestra, Hanseatica Chamber Orchestra, and with the Romanian Radio Orchestra. Her performances has been broadcast on BBC Radio 3 for Proms Plus, on Russian TvKultura and on Grampian TV.

She has been concertmaster of the Menuhin School and RCM symphony orchestras and she also performs and tours with the London Chamber Orchestra and the Philharmonia Orchestra, working with world-class conductors. Eunsley won the position of Concertmaster at the Niederbayerische Philharmonie Orchestra and will combine the role alongside her solo activities in the next year.

Eunsley was a student at the Yehudi Menuhin School, where she studied with Rosemary Warren-Green and Natasha Boyarsky. She held the position of RCM Junior Fellow (Constant and Kit Lambert Fellowship administered by the Worshipful Company of Musicians) from 2016-2017. She studied with Itzhak Rashkovsky at the Royal College of Music on the artist diploma course as an RCM scholar supported by a Lydia Napper award. She graduated with her Masters in Music (Performance) with Distinction as the recipient of a full scholarship (ABRSM), and with First Class Honours as an undergraduate scholar in receipt of RCM Foundation scholarships, Henry Wood Awards, the Douglas and Hilda Simmonds Award and the BMus1 award. Eunsley also undertook a semester of study at the Universität für Musik und darstellende Kunst in Vienna.

She plays on a 1800 Lorenzo Storioni violin, generously loaned by a patron of the Beare’s International Violin Society. Her bow is a Markus Fischer bow, on kind loan from the Harrison-Frank Family Foundation.