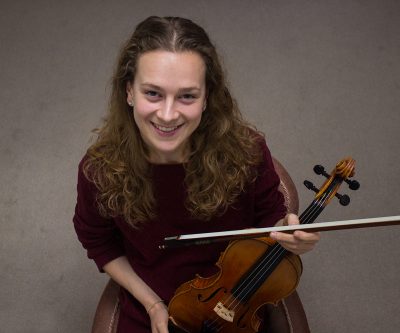 Born in Aberdeen, Jessica is a London based violinist and recently graduated from the Royal College of Music where she was generously supported by the Hilda and Douglas Simmons Award. Before moving to London, she spent six months in Oslo studying with Stephan Barratt-Due at the Barratt-Due Musikkinstitut where she performed with Olso Camerata under violinist Henning Kraggerud and took part in a collaboration with the El Sistema Simón Bolívar Youth Orchestra at the Bergen Music Festival.

In 2011, Jessica won the Edinburgh Festival Concerto Competition, performing Lalo’s Symphonie Espagnole with the Festival Orchestra. Since then, she has gone on to perform numerous concertos around the UK, notably Bruch’s Violin Concerto with the National Children’s Orchestra of Scotland in Perth Concert Hall. Jessica has presented solo recitals across the UK, including the inaugural concert of the recital series at Leith Hill Place, the family home of Ralph Vaughan Williams.

During her studies, Jessica enjoyed playing under the baton of renowned conductors such as Vasily Petrenko, Roger Norrington, Vladmir Ashkenazy and John Wilson; and in 2012, she joined the National Youth Orchestra of Scotland in a project alongside the BBC Scottish Symphony Orchestra and conductor Donald Runnicles, culminating in a performance at the BBC Proms Festival in the Royal Albert Hall. In 2014 Jessica was invited back to guest lead the National Youth Orchestra of Scotland where they toured the UK and performed at the Three Choirs Festival.

Jessica performs regularly as a chamber musician and is a founding member of the Vasara Quartet, receiving first prize at the Britten Intercollegiate String Quartet Competition 2013. They have since performed in prestigious venues such as Wigmore Hall, Royal Albert Hall, Kings Place, St-Martin-in-the-Fields, Conway Hall and Cadogan Hall. In 2014 the quartet was invited to perform at the residence of the British Ambassador in Paris.

This year Jessica has been a member of Southbank Sinfonia where she has had the opportunity to work with many conductors including Edward Gardner and Mark Wigglesworth, performing in venues across London and at the Anghiari Festival in Italy. Jessica has enjoyed leading the orchestra, taking part in numerous chamber music projects and working alongside members of The Academy of Saint Martin in the Fields and the Orchestra of The Royal Opera House.

Jessica is hugely grateful to the Harrison-Frank Family Foundation who is kindly loaning her an Italian violin by Romeo Antoniazzi.