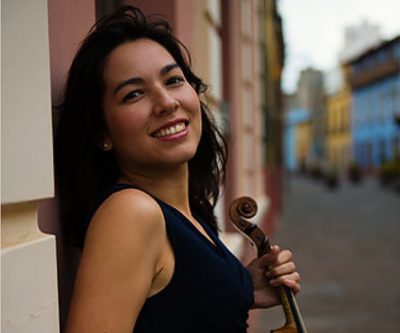 Spanish-South Korean violinist Judith Choi Castro has established a professional career performing in the UK and internationally as a soloist, chamber musician and orchestral player.

Judith was born in the Canary Islands and studied the violin with Anatoli Romanov, (a student of Poliakin, and the Leopold Auer school). In 2004, she moved to London under the studies of Yuri Zhislin, Natalia Lomeiko, Maurice Hasson and Mayumi Fujikawa. She graduated with a BMus with Honours degree and a Masters of Arts degree from the Royal College of Music and the Royal Academy of Music respectively. During her studies she won several awards inlcuding, Hatfield Music Festival 1st prize, J.E Motimer award from Martin Musical Scholarship Foundation, scholarships from “Cabildo de Canarias”, Ministerio de España, and Rondo Music society and finalist of the Llanes International Competition, Móstoles Violin Competition and “Concurso de Intercentros de España”. She was also chosen for an exchange program to study at the Manhattan School of Music in New York and received masterclasses from Midori Goto, Dmitry Sitkovetsky, Dong Suk Kang, Mauricio Fuks and Tasmin Little.

As a soloist and chamber musician, Judith has played in most important venues in the UK including St. Martin in the Fields, Fairfield Halls, Hannover Square, Regent Hall, Fitz William Museum in Cambridge, the National Gallery as part of the Belle Shenkman Music Program, Royal Opera House in Covent Garden and Cadogan Hall. In 2012 she played as a soloist Bach Double concerto with Adrian Butterfield and the Southbank Sinfonia at St. Jonh´s Waterloo. Outside the UK, She has also played chamber music concerts in Festivals in Japan, South Korea, Germany, Italy, France, Portugal, Sweden and Spain.

Aside of being a performer, Judith is the owner of CHOIMUSIC Records. She has recently recorded her debut album “Assorted Encores” under her own record label. Judith is also the artistic director of the Festival Academy of Music International in Tenerife, which celebrates the 14th Anniversary next February 2018.