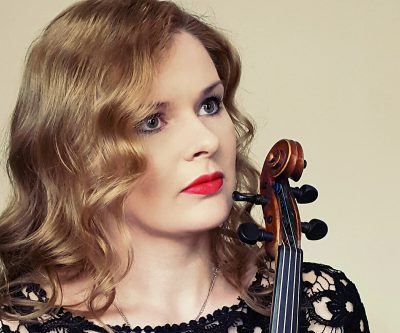 Lasma Taimina was born in Riga, Latvia. She started her violin studies at the age of seven. Five years later she was accepted in Emils Darzins Secondary school of music in Riga where she regularly received the best student scholarship and was the leader of school symphony orchestra.

In 2009 she was awarded a full scholarship to study at Queen Sofia College of music in Madrid, Spain with professor Zakhar Bron. In 2011 she received the best student diploma from the hands of Her Majesty, Queen Sofia of Spain.

Lasma was a leader of Brussels Philharmonic orchestra(BPHO,Youth orchestra of Belgium). She was regularly invited as a guest artist to perform with Kremerata Baltica, in USA and Europe. In 2013 she became a laureate of Henri Koch International violin competition in Belgium. In 2014 and 2015 she was a member of Saint Cecilia Classical orchestra in Madrid. In 2015 she starts her postgraduate studies at the Royal College of Music in London where she has been awarded a Leverhulme Postgraduate studentship. In 2017 she graduates and is awarded Master with Distinction.

She has been the leader of RCM Symphony Orchestra with G.Mahler 9th Symphony and I.Stravinsky’s Pulcinella ballet under Vladimir Jurowski. Also in June 2016 and October 2017 (with Vladimir Ashkenazy) she lead the RCM Symphony orchestra at the Royal Festival Hall.

Lasma is a scholar of Drake Calleja Trust in 2016 and again in 2017. In 2017 is a RCM Artist Diploma student with scholarship. As a soloist she has played recitals and performed in Latvia, Lithuania, Germany, Spain, USA,Belgium.

As chamber musician she has performed regularly with very wide range of groups playing the most various repertoires. In 2011 she made a CD recording as the first violin of string quartet with L. van Beethoven´s Razumovsky quartet no.1 and J. Brahms´s Clarinet quintet. With her London string quartet regularly performs in concerts in UK and Spain. In March her string quartet performed in Wigmore Hall and in June at the Cadogan Hall.