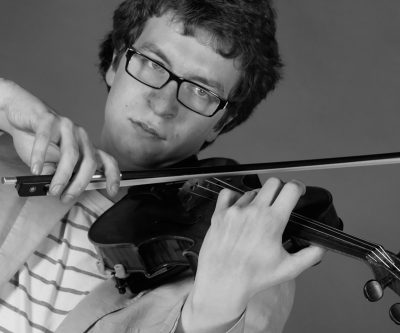 Oscar Perks enjoys a varied performing career playing both violin and viola. He is the second violinist of the Dante Quartet, works as an assistant violin teacher at the Yehudi Menuhin School and also pursues an interest in composing and arranging. Having started playing the violin at the age of five, Oscar was awarded a place to study at the Yehudi Menuhin School three years later where he had violin lessons with Hu Kun and Simon Fischer. Oscar went on to read music at Gonville and Caius College, Cambridge, where he studied composition with Robin Holloway. During his time at Cambridge, Oscar performed the Mendelssohn and Tchaikovsky violin concertos with the University Music Society, led the University Chamber Orchestra and was also invited to perform alongside the Endellion String Quartet as a second violist in concerts at West Road concert hall. He gained his masters with distinction at the Royal College, where he studied with Lutsia Ibragimova.

Oscar has performed at many leading London venues such as the Wigmore Hall, Barbican, Royal Festival Hall and Kings Place; and has also performed live on radio three. He is regularly visits IMS Prussia cove open chamber music and took part on Prussia cove autumn tour of England last year. His composition for string quartet The Twin Towers (2001) also won the BBC guardian young composer competition and was premiered at the Wigmore Hall. Oscar is also a founding member of The Perks Ensemble, a flexible chamber group he co-founded along with his brother and sister.